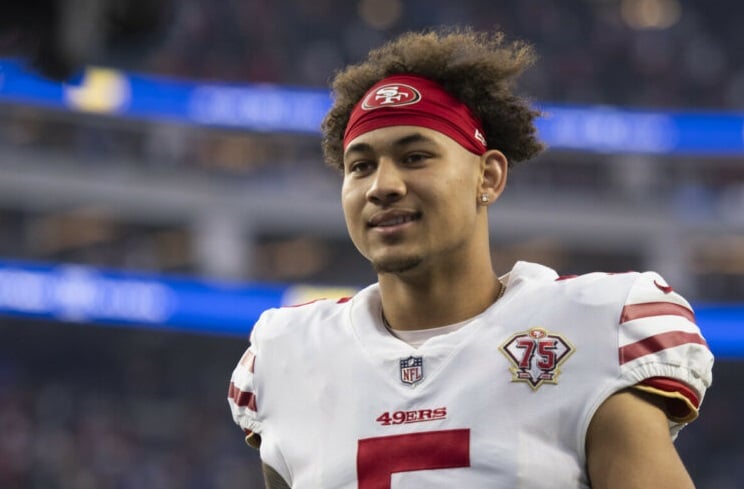 Trey Lance is the starting quarterback.

Questions have revolved around the 49ers’ direction at quarterback this offseason. Kyle Shanahan left no doubt who his starter would be in 2022.

Despite declaring Lance the starter, Shanahan and Lynch are still unwilling to release Garoppolo.

“You just can’t give away one of the best quarterbacks in the league; just make him available to everybody for no reason,” Shanahan said when asked if the 49ers would trade Garoppolo.

Lance showed the ability to make big plays during his rookie season, but the 49ers opted for the veteran. After getting a chance to spend a full season, Lance will finally get a chance to show what he can do.

Deebo Samuel was in Santa Clara. The 49ers continue to work to close a new deal with their star receiver, and John Lynch was upbeat when asked what the status of the talks was.

“We’ve had really productive, substantive conversations,” Lynch said. “I don’t want everybody to get all excited about the imminence of something because we’re not there yet. But I’m very hopeful that in the near future we can announce something that will be exciting for everyone involved. Deebo is here today and we’re excited to move forward with him as part of this team.

Lynch and Shanahan were noncommittal when asked if Samuel would be on the field practicing without a new deal in place.

Bosa’s extension is not imminent.

The 49ers often wait until a player is in the final year of his contract. John Lynch noted this when asked if an extension for Nick Bosa would wait until next season. San Francisco opted to exercise Bosa’s fifth-year option this offseason. The move gives the 49ers an additional year before going broke and making Bosa the highest-paid non-quarterback.

Competition at the center.

“Brunskill started at right guard for us for a while, and we know he can play center,” Shanahan said. “We have Jake Brendel doing that as well. There will be some competition there, big time. We have potential rookies to compete at right guard, so there will be musical chairs for this camp.”

Brunskill taking reps at the center will open up the opportunity for Jaylon Moore, Spencer Burford, and Nick Zakelj to compete at the right guard.

The 49ers will also be keeping an eye on the current crop of free agent centers. According to Lynch, they have a list of players they could add if necessary.

Trey Sermon got down to business.

When the 49ers used a third-round draft pick on Tyrion Davis-Price, some wondered if Trey Sermon’s time in San Francisco would be short-lived.

Sermon only had 41 carries in his rookie season, but according to Kyle Shanahan, he is doing everything he can to be ready.

Sermon’s ability to run inside zone should fit well with Trey Lance in the backfield. Four of Sermon’s eight carries, when paired with Lance during the first meeting last year against Seattle, led to carries of at least six yards.

Nkemdiche was originally selected 29th overall by the Arizona Cardinals in the 2016 NFL Draft. Over his five-year career with the Cardinals (2016-18), Miami Dolphins (2019) and Seattle Seahawks (2021), he appeared in 38 games (six starts) and recorded 59 tackles, 4.5 catches, and three passes defended, and two forced. fumbles and recovered a fumble.