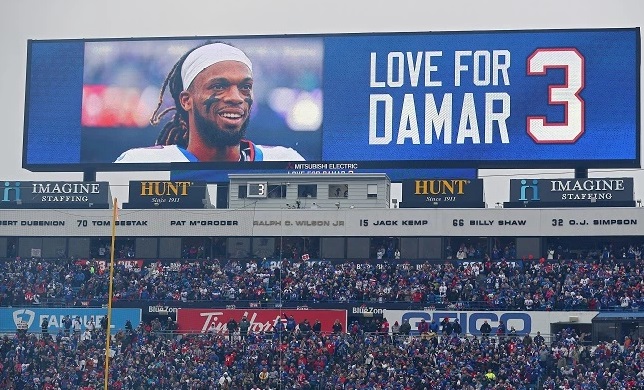 Damar Hamlin was released from the hospital where he was recovering in Cincinnati, a week after suffering cardiac arrest during an NFL game, and will continue his recovery at a medical center in Buffalo, medical personnel reported.

Pico y placa in Bogota today, January 10, 2023: schedules and restrictions
“We are excited and proud to share that Damar Hamlin was released from the hospital and returned to Buffalo,” said UC Medical Center.

“He is doing well and this is the next stage of his recovery,” the statement added.

In posts on Twitter, Hamlin thanked the medical staff in Cincinnati while paying tribute to goodwill throughout the sports world.

“Grateful for the amazing care I received at UCMC,” Damar Hamlin wrote, adding that the staff at his new hospital, Buffalo General Medical Center, “already made me feel at home. Watching the world gather around me on Sunday was truly an amazing feeling.”

“The same love everyone has shown me is the same love I plan to give back to the world and more,” the player added.

The 24-year-old linebacker was left in critical condition last Monday after collapsing during the Bills’ clash with the Cincinnati Bengals, forcing the game to be suspended.

The incident shocked the sports world and once again brought more scrutiny to the constant collisions players suffer in America’s most popular sport.

Damar Hamlin had been making steady progress since entering the hospital last week, regaining consciousness on Wednesday before addressing his teammates via video call on Friday.

University of Cincinnati Medical Center physician William Knight, who accompanied Hamlin to the airport before his transfer to Buffalo, cautioned that it was still too early to say whether the Bills player will resume his NFL career.

“He still has a long way to go in terms of his recovery. We’re thrilled with where he is today. He’s awake, he’s walking, he’s got an unbelievable sense of humor,” Knight told reporters during a briefing.

✔️Follow us on Google News with all the information from Colombia and the world.