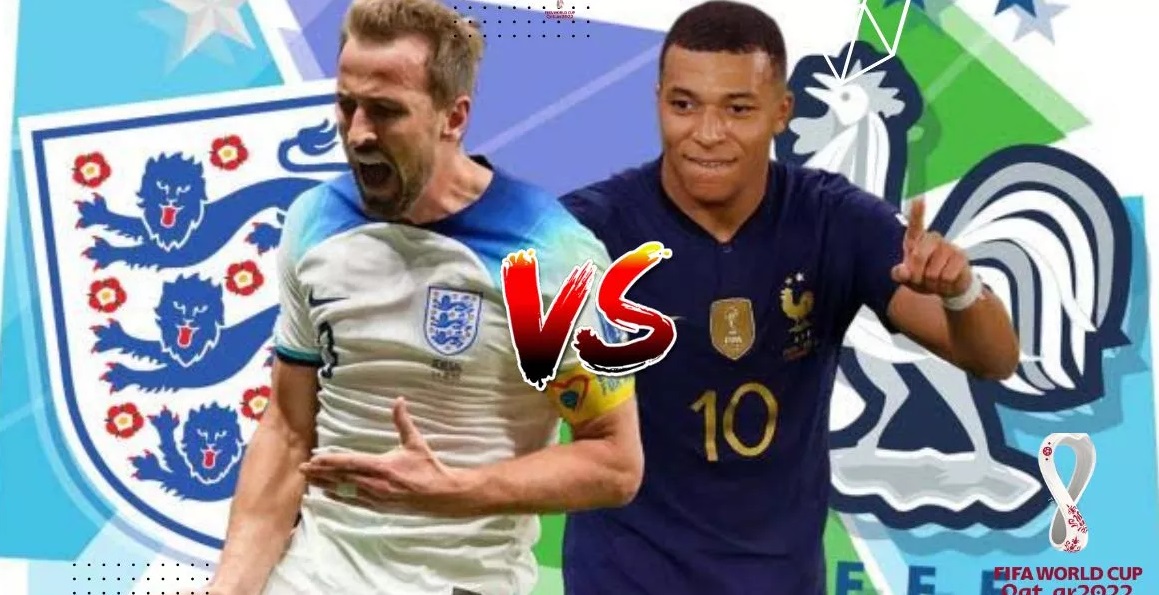 A heavyweight battle is on the card for the quarterfinals at the 2022 FIFA World Cup as France and England square off Saturday at Al Bayt Stadium. France is the reigning World Cup champion and the No. 4 team in the world, while England ranks fifth and was knocked out in the semifinals in 2018. Les Bleus also won the 1998 title and were runner-up in 2006, while England won one World Cup (1966) and also made the semifinals in 1990. Kylian Mbappe scored two goals as France cruised past Poland 3-1 on Sunday, allowing the goal on a penalty in the 95th minute. England also breezed into the quarterfinals, knocking off Senegal 3-0, their second straight victory by that score following the 0-0 draw with the USMNT.

Kickoff in Al Khor, Qatar is set for Saturday at 2 p.m. ET. Caesars Sportsbook lists France as the +155 favorite on the 90-minute money line (risk $100 to win $155) in the latest England vs. France odds. England is the +200 underdog and a draw is also listed at +200, while the over/under for total goals scored is set at 2.5. Caesars has France at -133 and England at +100 to advance. Before locking in any France vs. England picks or 2022 FIFA World Cup predictions, make sure you check out the best bets and analysis from SportsLine soccer insider Jon Eimer.

Eimer is a high-volume bettor who has a vast knowledge of leagues and players across the globe. Since joining SportsLine, Eimer has covered the English Premier League, Serie A, the FA Cup, and much more. He is an impressive 48-25-1 on his Premier League picks for SportsLine in 2022, for a profit of almost $1,800 for $100 bettors. He also went 20-12 on his World Cup qualifying picks for a return of almost $600.

Now, Eimer has broken down England vs. France from all sides and just locked in his 2022 World Cup picks and predictions. You can head to SportsLine now to see his picks. Here are the betting lines and trends for France vs. England:

Why you should back France

France has reached at least the semifinals five times in their past eight appearances, while England has done so twice. England might have to take a conservative approach Saturday in such a critical match, as their defense has played well so far but was a serious concern coming in. If they don’t, that will open the door even more for Mbappe, who has a tournament-high five goals to continue his dominance from France’s Ligue 1. The 23-year-old leads the league with 12 goals for Paris Saint-Germain and has scored 19 in 20 total matches. He has 33 goals for the national team — seventh on the team’s all-time list — with likely a decade or more still to play.

Olivier Giroud moved atop that list with his 52nd goal in the victory against Poland. The 36-year-old has stepped up big in place of Karim Benzema. Antoine Griezmann is third on the all-time goal list, but his 42 goals don’t show his full value. The Atletico Madrid midfielder is a key to disrupting the opposition, and his excellent feeds set up the speedy Mbappe and Ousmane Dembele on counters. Dembele has four goals in La Liga with Barcelona this season. Goalkeeper Hugo Lloris will become France’s all-time leader with his 143rd cap Saturday.

Why you should back to England

The Three Lions started with an emphatic 6-2 victory against Iran, then might have eased off the gas a little bit against the USMNT. They won both games 3-0. Kane scored against Senegal and has a tournament-high three assists. Bukayo Saka and Marcus Rashford have three goals apiece, and Phil Foden, and Jack Grealish also have been part of the scoring burst, Midfielder Jude Bellingham also scored in the opener, but he has really opened eyes with his energy and ability to disrupt and distribute in midfield. The 19-year-old has become a key piece.

Premier League stars Mason Mount, Declan Rice and Jordan Henderson join the Borussia Dortmund youngster in a stacked midfield. The team’s three straight clean sheets make Jordan Pickford the tournament leader in that category. He is tied for third in the Premier League with a save percentage of 80.5 and has a 79.5 career mark with England. Harry Maguire looks rejuvenated with the national team and is winning balls in the middle. Fellow defenders John Stones, Luke Shaw, Kyle Walker, and Kieran Trippier all have plenty of experience in the back.

How to make France vs. England picks

Eimer has scrutinized France vs. England quarterfinal match from every angle, and he is leaning Over on the goal total. He also has three confident best bets, including a strong play on one team to advance, and his full breakdown of the match.