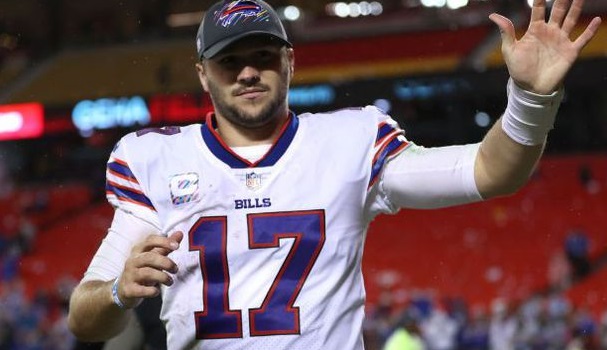 The 2022 NFL season finally descends upon us and it does so with a bang. The Los Angeles Rams begin their defense of the Vince Lombardi Trophy against the Buffalo Bills, the number one contender for the title according to oddsmakers.

Let’s be clear, I’m not trying to be some kind of guru. It has never been more important that we think for ourselves.

The NFL has more and more complexities that make it almost unpredictable.

What I’m offering this season in the mile-long picks race I’ll be keeping with @ivan_pirron is data and trends to help in your decisions.

Last season was one of the most competitive in league annals and was the first year of a structure where each team played 17 games on the regular schedule.

According to multiple predictions that are based on simulations of hundreds of games, the 2022 season will end where it began: with the Buffalo Bills challenging the Rams and trying to sever their connection to tragedies.

Josh Allen returns to California, never having played pro ball in his native state. The quarterback has guided the Bills to back-to-back AFC East titles, has a 3-1 record against NFC West teams, including a win over the 49ers in 2020, but in Arizona due to health restrictions in California.

The Bills will try to hurt the Rams’ crown and in the process cut the streak of Sean McVay, who has never lost as head coach in the first game of the season. The most recent coach to string together six wins in Week 1 was Mike Shanahan (1988-89, 1995-98). Incidentally, Shanahan hired McVay, then 24, as assistant tight ends coach in 2010 with Washington.

The reigning champs have hosted the opener since 2004 and in that time have gone 14-2 .

The addition of Von Miller to Buffalo’s defense will have an immediate impact on the Rams, not only for letting him go but for facing him.

If Von Miller and the rest of the Bills’ front seven can get pressure on Matthew Stafford, Los Angeles will be in trouble as they managed to win only three of seven games in which their quarterback was caught.

It’s not hard to tell: the Atlanta Falcons are a team that in 2022 appears to be on track to capture pick 1 in the upcoming Draft. The team’s offensive line is one of the weakest and the Saints can take advantage of that by exploiting turnovers. The Saints’ defense is fantastic The Saints have received a lot of praise this offseason.

Falcons lead the series 53-52 but the Saints have won four of the last five meetings.

One of the teams that improved the most from last year to this season are the Lions. Jared Goff is obviously not an elite quarterback, but his level has grown since he stepped away from the Hollywood spotlight.

The Eagles also improved by adding AJ Brown, who gives Jalen Hurts a legitimate number one wide receiver over the skilled DeVonta Smith. Detroit will pull off one of the surprises on Sunday.

Lovie Smith is a good coach who will bring order to Houston’s chaos, but not so good at overcoming Indianapolis’ talent. Colts 35-21 Texans.

Trey Lance will have a nice field day at Chicago 49ers 35-21 Chicago.

At some point you give him to know what Bill Belichick is doing or trying to do, but one thing is for sure: having Matt Patricia as offensive coordinator is about as embarrassing as going in the ocean with a T-shirt on. Patriots 20-30 Dolphins

Lamar Jackson may not have his big contract secured yet, but the first win of this season is in his bag. Ravens 33-17 Jets

Two of the most electric quarterbacks will go head-to-head, only Mahomes will go out with his arm raised and a pair of touchdowns. Chiefs 33-28 Cardinals.

Hopefully, Aaron Rodgers isn’t playing under the effects of the ayahuasca he tried on his South American trip, but even if he is, Green Bay will celebrate the first success of the season. Packers 42-40 Vikings.

Jacksonville isn’t nearly as bad as the records it reaped in its previous two seasons. Jaguars 21-14 Commanders

Steelers at Bengals (6.5): AFC champs on the scene. They won’t win that easily. Steelers 20-23 Bengals

Brian Daboll shows up as Giant’s head coach, they will improve but not enough to beat the Titans, the top-seeded team in the AFC last year. Giants 17-21 Titans.

Chargers light up under the Hollywood lights. Raiders 14-21 Chargers

Russell Wilson likes Seattle so much he’s coming back to town to do what he does best: win. Broncos 30-14 Seahawks