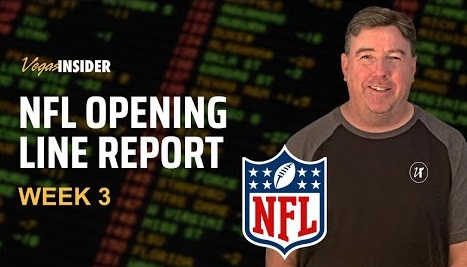 Let’s compare the NFL Week 3 opening lines with the current betting odds for each game.

First, let’s recap what has transpired in Week 2 NFL action.

The Over/Under was 5-10-1 in Week 2, marking the second consecutive week with many unders.

There has been no line movement yet in this matchup between AFC North rivals.

The Panthers are winless and we could see this point spread continue to trend in favor of the Saints.

We probably won’t see much movement on the line in this matchup featuring two of the NFL’s weakest teams.

The Colts are struggling and early action has come for the Chiefs ATS and under.

Depending on how the Bills look on MNF, we could see this spread get closer to a FG.

If the Vikings win on MNF, this spread could jump over a TD later this week.

If you like the Ravens in Week 3, lock in this spread, as a hook could be added before Sunday.

The Bengals are winless and in desperate need of a win in Week 3, but will they cover ATS on the road?

This line is likely to start moving after the Titans game against the Bills on MNF.

The Eagles have already seen the spread they need to cover jump over a FG earlier in the week.

With the Jags playing well, bookmakers have had to adjust the Chargers spread lower.

The Ram’s spread is up two points despite the Cardinals winning as underdogs in Week 2.

I’m surprised this line fell below a FG with the Seahawks playing at home.

The total has already ballooned as the Bucs offense has been banged up early in the season.

Dak Prescott’s injury has had a big impact on the betting lines. The Giants are now the favorites at home.