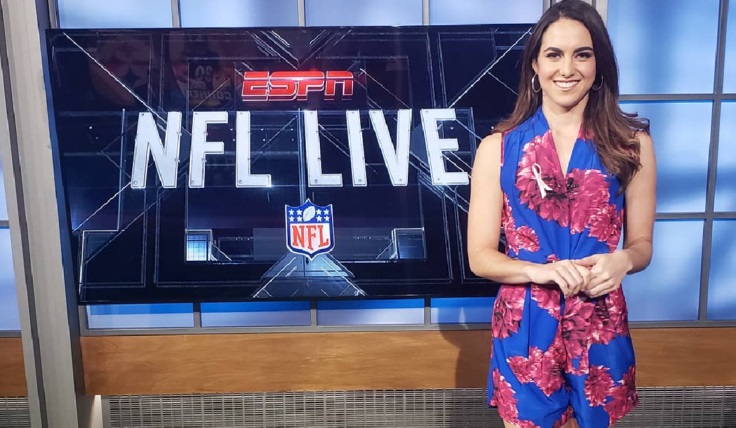 Beyond the media, Rebeca Landa is also known for being part of the Mexican Flag Football Team. Journalist Rebeca Landa became Monday the first woman to narrate a nationally televised NFL game in Spanish in the United States. The Mexican narrator did it in the Bills game against the Titans, commenting play-by-play on the actions of the game.

In the company of the experienced Ciro Procuna and through ESPN, Rebeca Landa was able to fulfill her dream of narrating not only an NFL game but also a Monday night game, in one of the most prestigious schedules in the league. The narrator showed her knowledge in a broadcast that undoubtedly sets a precedent for the future and joins pioneers such as Georgina Ruiz Sandoval, who had already participated in Monday night games.

“When I started narrating football in college, in my wildest dreams I thought that someday I would have the opportunity to do it for MNF. American soccer has been a part of my life, as a fan, a player for the Mexican National Flag Football Team, and a communicology. Now to take the step to MNF as a narrator and on-field reporter is a dream come true. It will be an honor to share my passion and love for the sport with the extraordinary MNF team,” said Landa in a post shared on ESPN’s social media networks.

Over the years, Landa has participated in several important events, covering not only football but also tennis and other sports.

YOU MAY BE INTERESTED: Flag Football aims to be an Olympic sport in Los Angeles in 2028

She is a world champion
Beyond her facet within the media, Rebeca Landa is also known for being part of the Mexican Flag Football Team that a few months ago won the gold medal at the World Games in Birmingham 2022, after defeating the United States in a resounding manner. Throughout the tournament, Landa, from her defensive position, was a fundamental part of the success obtained.

“That they follow their dreams, that with effort and dedication they can achieve those dreams. Let them go out and seize opportunities, that there are no limits in this world and always look for more. Just as we grabbed this medal, let them grab their dream. There is no maximum, let nothing stop them from seeking the best version of themselves,” she said after winning the gold medal, in a phrase that shows her personality and desires to break barriers.