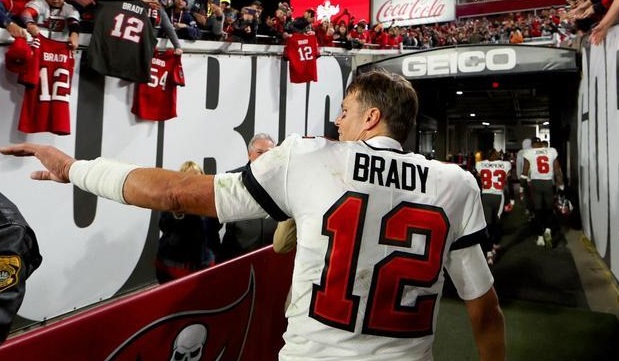 Tom Brady’s time with the Tampa Bay Buccaneers seems to have come to an end. After the resounding 31-14 loss to the Dallas Cowboys in the Wild Card round, endless possibilities open up for the veteran quarterback, who could have in mind a change of scenery for next season.

Tom Brady’s twenty-third NFL campaign, the greatest player of all time, hasn’t ended in the best way. Tampa offered a poor image in the most important game of the year, and the sensations suggest that we will no longer see the quarterback in what has been his franchise for the past three seasons.

“This moment just feels like the end of the season, for today I just want to go home and get a good night’s sleep tonight; I want to thank you all for this year. I’m going to take this one day at a time,” he said at a news conference after the playoff game against Dallas.

At 45, the quarterback has not played a bad year in terms of numbers and has finished third in air yards (4694) and ninth in touchdowns (25), but now it seems that his time in Buccaneers has come to an end, a team with which he was crowned champion in 2021 after more than 20 seasons in the New England Patriots.

Brady retired at the end of last year, but just a month and a half later announced he was returning to play for Tampa for another year. The seven-time Superbowl champion will be a free agent in the upcoming offseason, and his future is more up in the air than ever.

Some experts say that ‘The GOAT’ will look for another new project in which he can compete for everything while others predict a possible second and definitive retirement for former Michigan.

At the press conference, Brady dropped a farewell-sounding message: “I really appreciate all your effort, I know it was difficult for everyone, even for us players. We all work hard to get here; To everyone watching, to the fans I am very grateful for everyone’s support,” he concluded.

His tone is goodbye in the franchise, but not the NFL. Tom Brady is the greatest competitor of all time and knows full well that he still has gas left in the tank for one last attempt to win the Lombardi trophy for the eighth time in his career.

There are certain teams in need of a leader who will bet everything to make Brady their starting quarterback for the 2023/2024 campaign.

"There's a chance" Tom Brady does not return to the Bucs next season, per @RapSheet

The Titans, Raiders and 49ers would be interested in the veteran QB if he doesn't return to Tampa Bay. pic.twitter.com/5n15IPKu34

Two of the teams that have sounded the most in recent hours are Las Vegas and Tennessee. After the departure of Derek Carr in Raiders, there are reports that suggest that the 45-year-old quarterback could land in Nevada, where he would have Josh Jacobs and Davante Adams as companions on offense and Chandler Jones or Maxx Crosby on the defensive spot.

In Titans, there is an urgent need to have a pin of guarantees after the rollercoaster that the team has experienced under the controls of Ryan Tannehill in recent years. Mike Bravel, the team’s head coach, will try to convince Brady for a ‘last dance’ in Nashville. The lack of talent in the receivers seems like a point against in this decision-making.

Tom will have no shortage of “girlfriends” in the search for a new home, and other more attractive options could be 49ers and New York Jets. San Francisco is already one of the best teams in the league but will have to make the decision whether to keep Brock Purdy as QB1 next year.

New York is relentlessly looking for a quarterback after the failures of Zach Wilson and Sam Darnold in this position, and Tom Brady seems the perfect fit in a team with very good wickets in both offensive and defensive units.

Now everything is in the hands of Tom, who has absolute freedom to make a decision about his future. No option is closed, but we bet on seeing Brady on the pitch again for next season. He never tires of competing, nor do we get tired of enjoying his game.